We have spent the weekend extending the patio in our garden. There is dust and cement everywhere, all over my poor flowers. I am escaping from the chaos for half an hour to write another blog post!

After our amazing but very tiring week on the side of Alp d’Huez watching the giant cycling spectacle that is Le Tour de France and all that goes with it pass through (see previous post https://lickingtheplateagain.wordpress.com/2013/08/17/im-back-french-holiday-part-i/) we headed to a gite in the Indre region of central France for a week of relaxation! (cue lots of eating, reading, eating, sunbathing and a bit more eating).

The gite, in a 200 year old longere in a rural hamlet surrounded by rolling fields, was the perfect spot to wind down following the madness of the alp. I was also rather glad to get out of the campervan, despite all my initial excitement about hiring one. We were both sporting numerous impressive bruises after a week in it! We didn’t venture out to eat too much during this week as we were mainly just too happy pottering around our lovely little gite and garden pleasing ourselves. We did have one special meal in a local restaurant (which I will tell you all about in my next post!) but mainly we enjoyed lots of barbecues, big hearty rustic salads and picnics! 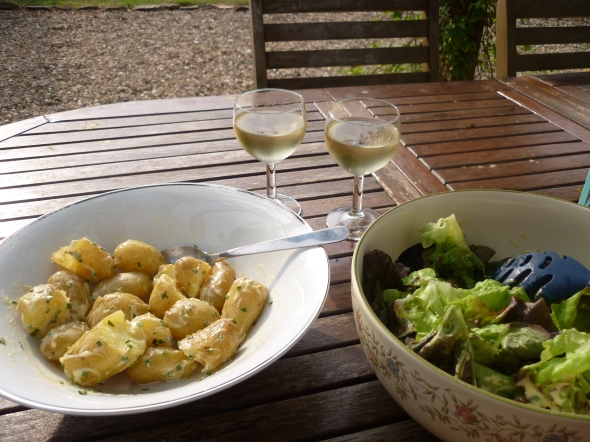 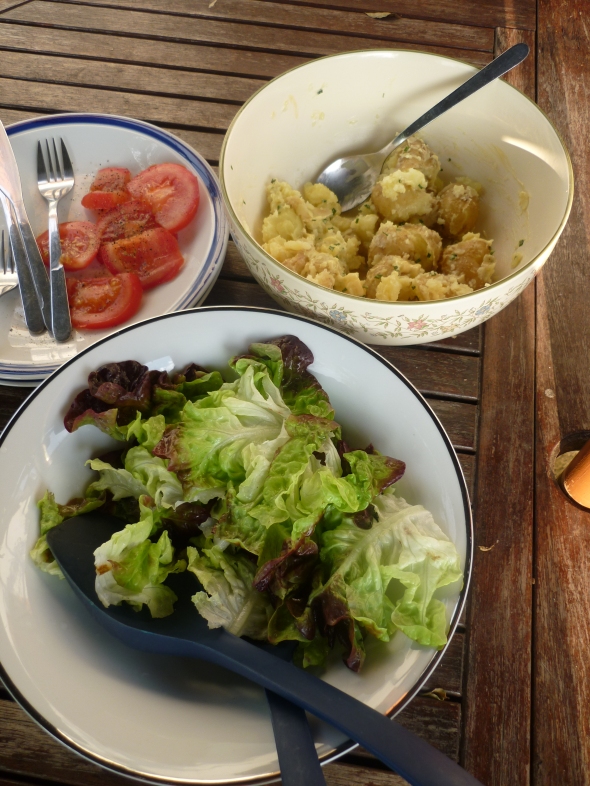 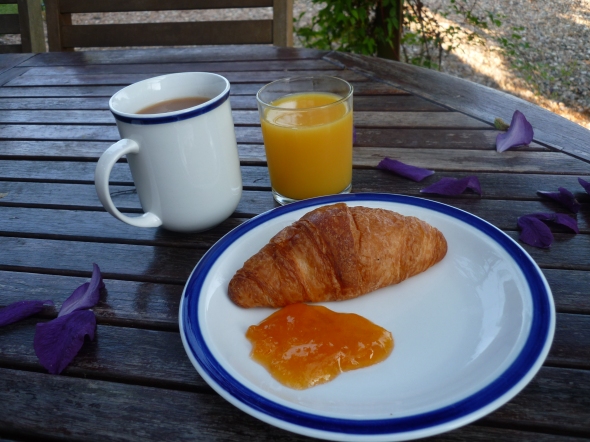 Tasty breakfasts (some healthier than others!) 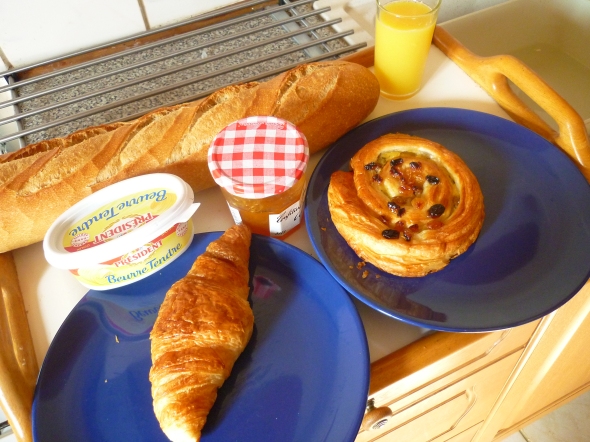 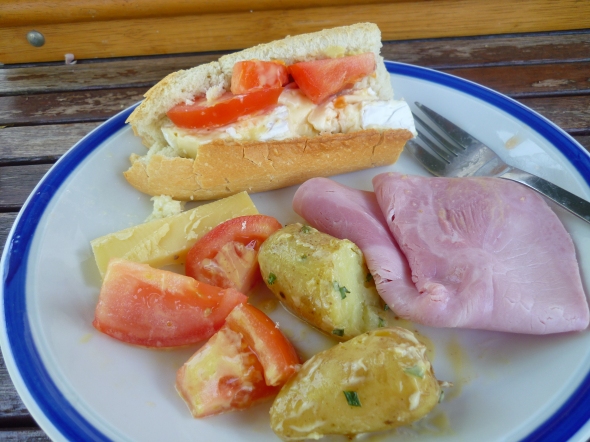 Is there much in this life better than a wodge of gooey brie and couple of tomatoes shoved into a chunk of baguette? Biting into it and letting the juices from the tomatoes run down your chin? I think not. 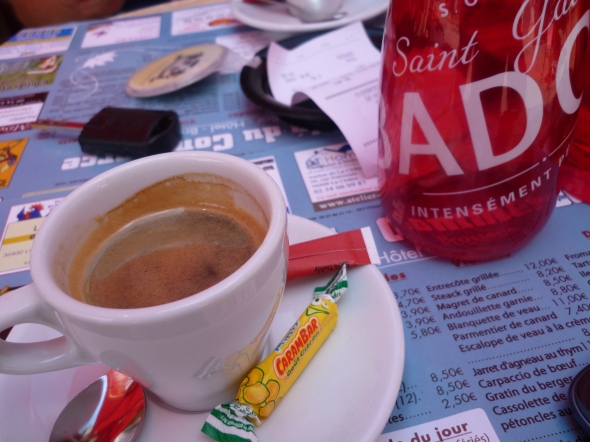 Treats from the local boulangerie

What do you do when you have a stale baguette to use up and a heap of very ripe tomatoes? Make a tomato sauce, slather it all over the bread, top with ham and generous amounts of camembert (perhaps I was a little too generous, this was pretty filthy! Sooooo good though!) and grill! Et voila! A French bread pizza! 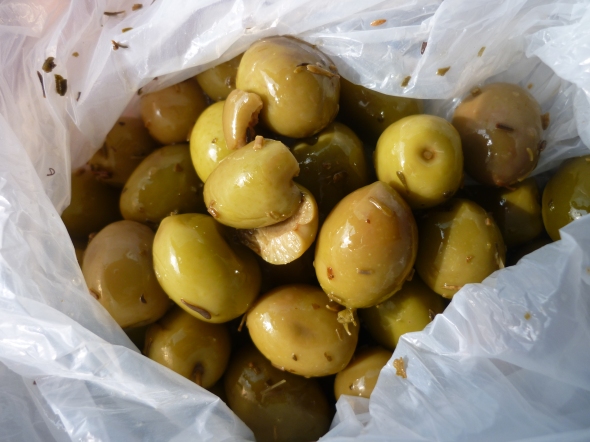 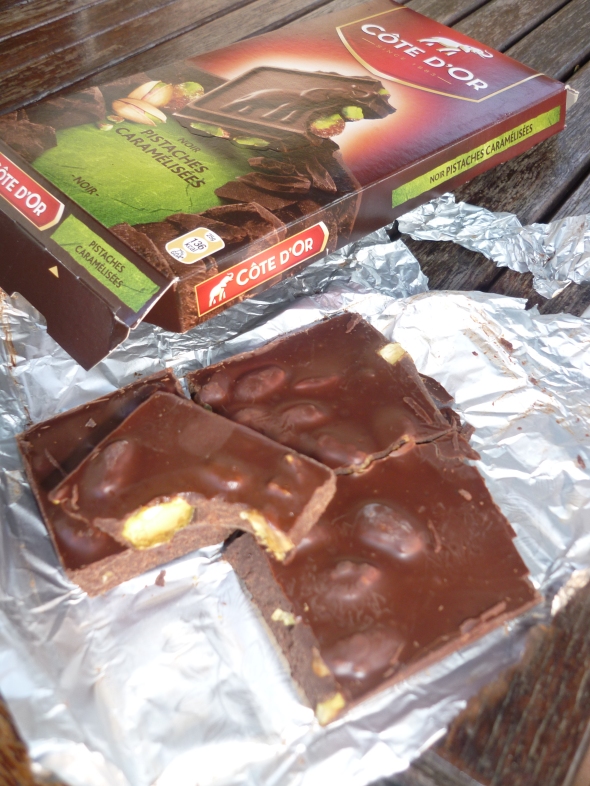 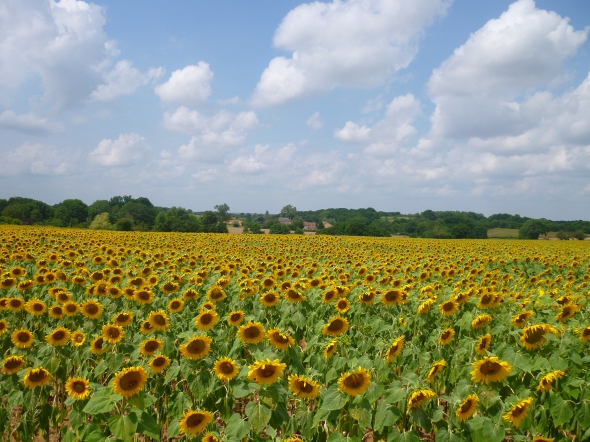 A few weekends ago we headed down to Norfolk for a couple of days aboard the Broads. We were both excited to get away for a few days, especially as it is part of the UK that we’ve not been to before. People complain that Norfolk is a pain to get to as there are no motorways but I think that’s nice, it lends the county a lovely relaxing rural away-from-it-all feel, a slower pace of life. Or certainly so it seemed for those of us on holiday cruising along the peaceful reed-lined waterways!

Being on a river boat is rather like camping on water, and therefore the perfect excuse for a barbecue or two! I loved being able to pick a pleasant looking spot on the side of the bank, moor the boat up, jump onto the bank and light some charcoals. A sausage sandwich was of course a must, hot and juicy pork sausages, crammed into a toasted bun oozing with melted butter…. mmmm…. sometimes it is the simplest things! We also barbecued tomato and spice marinaded chicken breasts, charred and sticky, and buttery freshly in season asparagus served with crunchy salad and fluffy couscous. All enjoyed sat aside the rippling waters with passing swans, ducks and geese, sail boats and wherrys. 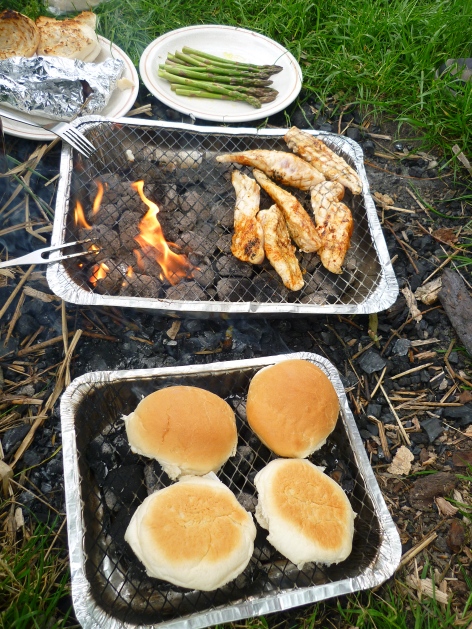 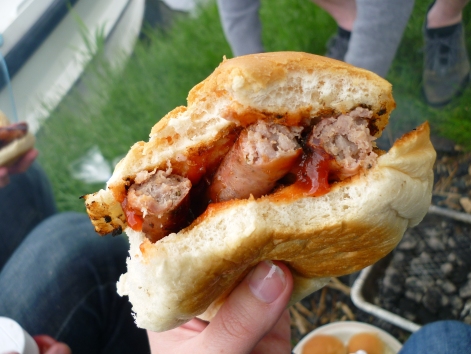 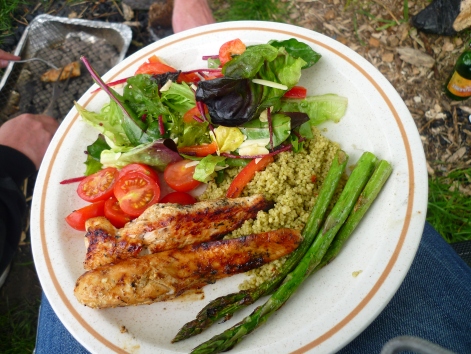 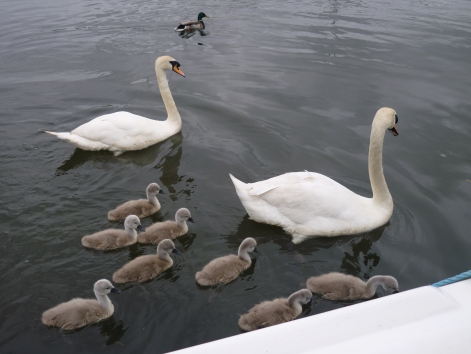 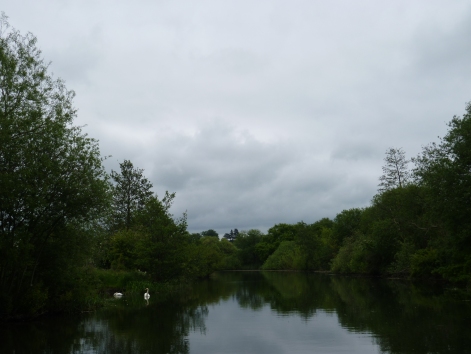 Unfortunately we were not always so blessed with dry weather, let alone sunshine, as the heavy grey skies of these pictures show! When the rain turned on us we had no choice but to take shelter in a number of cosy countryside pubs and restore ourselves with hearty local ales and pub grub. This steak and ale pie with intensely smooth creamy mash and deliciously minty mushy peas was probably the tastiest pie I have ever eaten!

Despite the rather inclement weather, we of course had to buy some ice creams from the passing ice cream boat! Jazzed up with sweet juicy strawberries, delicious! 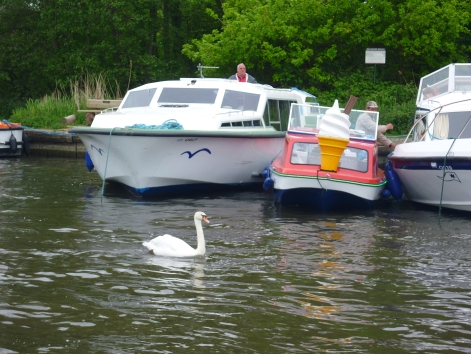 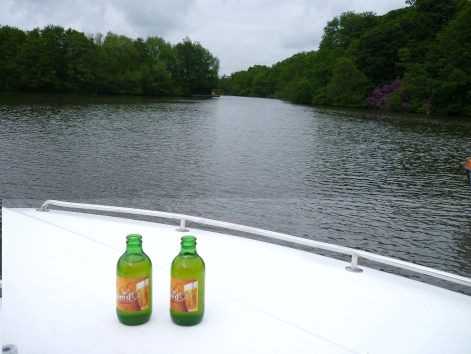 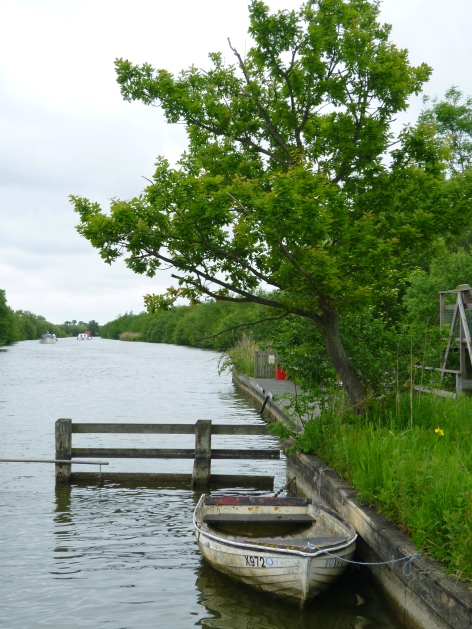 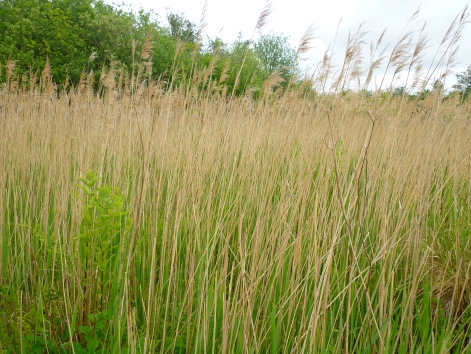 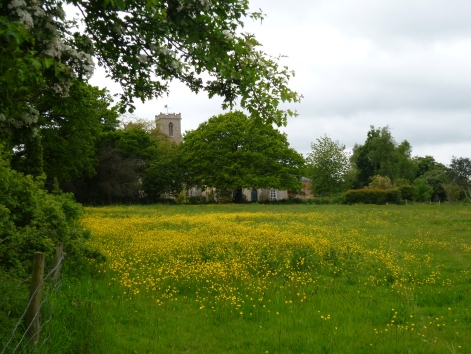 Rejoice rejoice! Summer has arrived! And living where we do, one must enjoy it while it lasts! I don’t know about you, but I literally feel like a different person in the sunshine. It just makes me feel so HAPPY and full of energy and like the little stressy things just don’t matter! Ahhh. And I just love summer eating too! 😉

The weekend before last we were up in sunny Scotland for a long weekend visiting friends and family and enjoyed some really stunning weather.

A beach walk with friends on the North Berwick coast was, of course, enjoyed with steaming hot fish & chips (plenty of salt & vinegar), eaten with fingers not forks (then you get to lick all the vingeray salty vinegary deliciousness off your fingers at then end!) 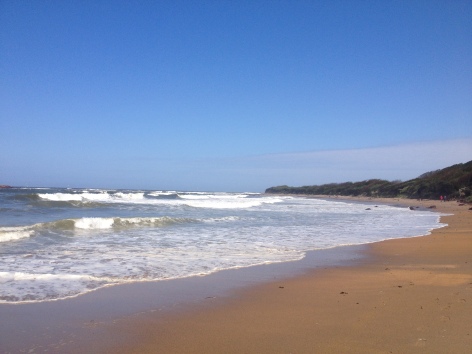 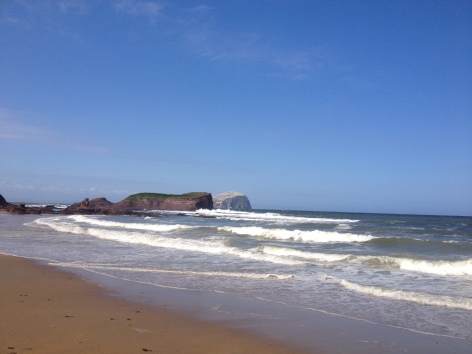 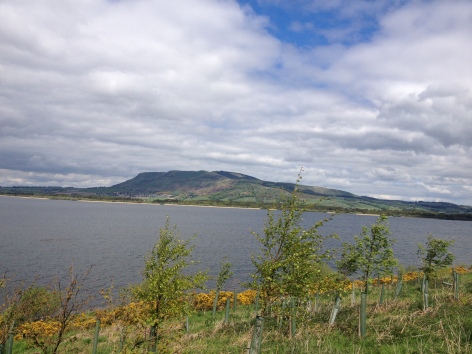 And after a hot hike up the hill we enjoyed barbecued salmon with lovely crispy skin, juicy sizzled sausages and homemade potato salad with freshly dug tatties and chives from the garden – perfection!

Even the lovely Scottish gorse was out in force, a riot of yellow against a clear blue sky, the heady coconut scent shouting Summer is Here!

The blissfully gorgeous weather has continued this week in Manchester while we’ve been back which has meant more al fresco eating opportunities!

Toasted marshmallows at a friend’s barbecue. I love when the outside goes all charred and crispy and the inside is gooey, sweet and melting!

And an impromptu picnic in the park after a sunny post-work walk along the river last night! (That’s a rounded meal there!)

I hope that you all have lovely weather where you are too (especially my long-suffering fellow UK bloggers!) and are enjoying some fun times and good food in the sun!

So last weekend spring finally fully hit Manchester! In fact, you could probably say forget spring, summer had just swooped right in, given we had TWO CONSECUTIVE DAYS of bright sunshine and 20 degrees!! (Just a shame that one of them was a work day!) Except now we are back down to 8 or 9 degrees and I am staring out the window at the same grey skies and rain that we have had for the last four days and are forecast to have for the next four days… So I am going to reminisce about summer last weekend with this post about our first barbecue of the year!

I am quite probably halloumi’s biggest fan. It is just the most brilliant foodstuff ever, don’t you think?! So meaty yet cheesy and so satisfying. And oh so delicious when grilled or barbecued. I have made pepper and halloumi skewers whenever we’ve fired up the barbie for years now, as well as peddling them at the barbecues of friends and family too! So of course I was definitely making these for our first bbq of the year.

Given it was just the two of us, and we felt like being a bit healthier, we decided to barbecue some swordfish. I really like barbecued fish, it’s a nice change from the usual meat-fest and goes really well with a nice summery salad. I’d never tried swordfish on the barbecue before so was pretty excited to try these delicious steaks! In order to make sure the fish stayed really juicy and moist, I decided on a sticky glaze type marinade. I also wanted something that would be fast to do and faff-free – minimising kitchen time and maximising sunny garden time! I sort of made it up as I went along so don’t have the measurements, but it was so simple and worked a treat! – I glugged some soy sauce into a pan along with some dark brown sugar, and kept stirring until the sugar had dissolved, then took off the heat, squeezed in a little fresh lime juice and poured over the fish. The fish was then basted during cooking with more of the sauce. So simple but so tasty! It really coated the steaks well, kept them moist and juicy, and was very moreish! 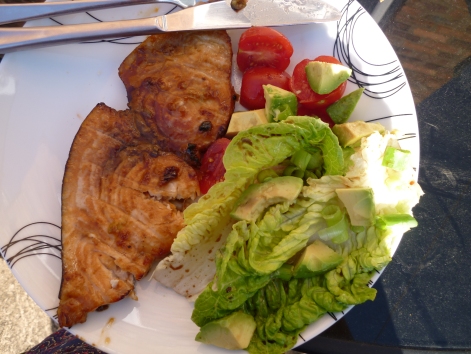