Last weekend I went to visit my good friend in Stafford. Knowing me well, she had organised for us to go to a food festival at Shugborough Hall, a historic country estate spread over 900 acres of parkland.  While the day started out very overcast and grey, it was at least dry, and, having strategically just had a fruit smoothie for breakfast, I was ready for a day of eating! We decided to share everything that we ate, therefore allowing for more tastes of more things (again with the strategic eating!)

There were so many food vans and stalls, it was hard to know where to begin! After working our way round one of the large marquees and enjoying a few free samples (including some rhubarb crumble fudge!) we decided to give Rita’s Mexican a whirl. 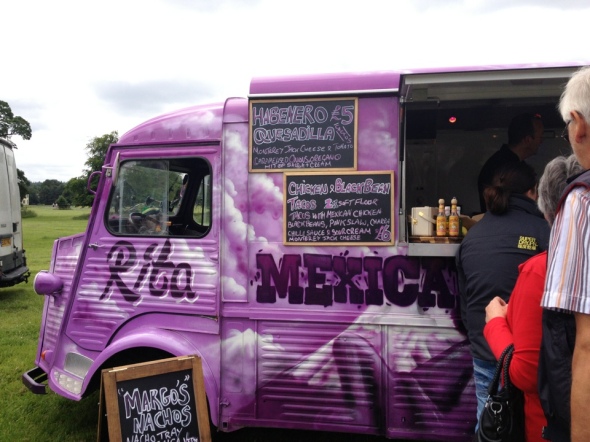 Washed down with homemade lemonade.

We kept spotting people walking around with impressive looking sticks with some sort of sliced potato snack on. Having  consulted the festival programme map we hunted down the relevant food stall!

These fried “twisted potatoes” could be topped with a number of different flavous, we opted for beef steak! 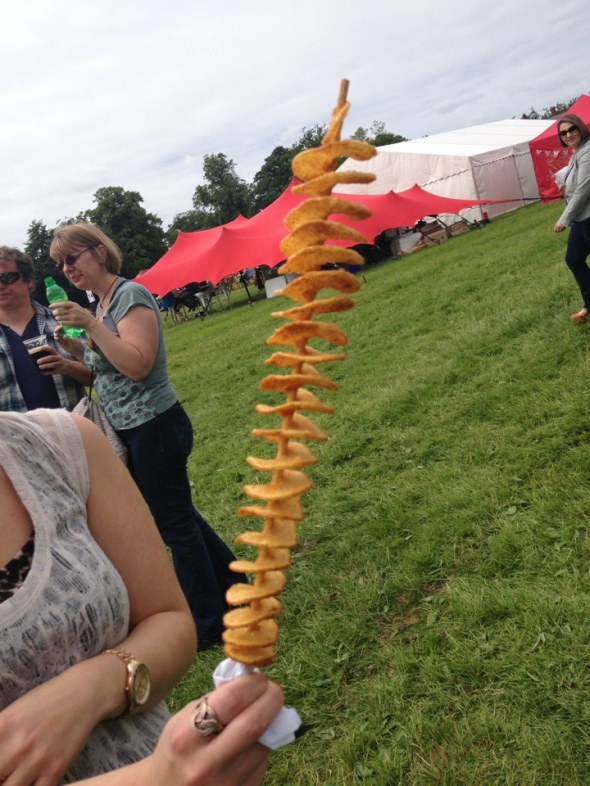 After a break to peruse some more stalls (from one of which I bought the Hairy Dieter’s cook book after hearing such good things about it, looking forward to trying out some new recipes soon!) I passed one of my true weaknesses – sweet honey covered nuts. I can not resit them!

Later on in the afternoon we watched a Man vs Food eating challenge. The contestants had to eat a chilli vodka shot, an extra hot spicy sausage with mashed potato and gravy and a chilli and mango sorbet as fast at they could. The victory time was, I think, under 3 minutes – crazy! While we weren’t tempted to join in, it did make us fancy a sausage! There were so many different vendors to choose from, in the end we plumped for a really tasty classic British pork sausage to share, which made a change from a lot of the (equally delicious!) continental sausages that are increasingly popular at these sort of things these days.

Towards the end of the afternoon, the sun made a sudden, and strong appearance! After enjoying soaking up some rays in the grass for a while, we grudgingly shunned our planned churros dessert for a more temperature-appropriate ice cream. I was delighted to spot Ginger’s Comfort Emporium on the festival listing, a local “ice cream van for grown ups” that frequents the regular markets in Chorlton and elsewhere in South Manchester. 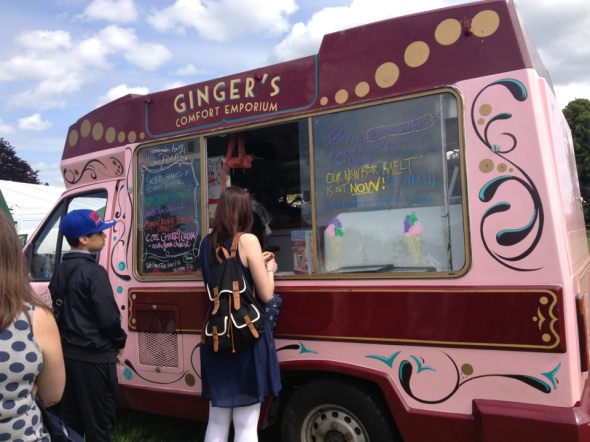 Previous favourites of mine from Ginger are marmalade on toast, plum crumble and dark chocolate sorbet. This time I opted for the lemon and orange blossom sorbet while my friend went for so-called Chorlton Crack – the ludicrously luscious peanut butter and salted caramel ice cream. While this is truly and utterly delicious, it is rather rich and heavy, and alas I had to help her finish it!

All in all, it was a great day out. I’ll leave you with snaps of two of the other exceptionally cute food  stands that I came across