I’m back! / French Holiday Part I

Eeeeep! It’s been rather a while since I’ve written a post on here! In my defence, I’ve been rather busy finishing up at one job, spending two weeks in France watching boys on bikes and eating oodles of cheese and bread (more on that shortly), and then starting a new job! So the last month or so has been a bit of a whirlwind to say the least! But I’m back now! And ready to talk about France!

France has long held a special place in my heart, ever since our annual camping trips as kids to grown up holidays in rural gites and city breaks in Paris. The food, of course, plays a significant part in this, but so too do many other things. One of the other many things I love about France is Le Tour, La Grande Boucle, the greatest and most difficult sporting endurance event known to man. Boys on bikes. Brilliant scenery. And a whole country gripped with velo fever for three whole weeks, every year. What’s not to like?! (Some of said boys on bikes are rather pleasant on the eye too, it must be said 😉 ). This year, for the first time, the OH and I were going to be watching a stage of the tour in France at the side of the road as opposed to on the TV in our living room! We had been planning this for a whole year and were beyond excited by the time the trip came around.

We had hired a campervan in Lyon and a after a few days in an Alpine campsite, we headed further into the mountains in order to stake our place on the side of the infamous Alp d’Huez with its 21 hairpin bends and vast backstory of cycling history. And this year, to mark the 100th edition of Le Tour, the riders were to climb the mountain twice. In one day. This was definitely the stage to watch! As the stage was expected to draw several thousand fans, we ensured that we arrived a few days before to guarantee a spot – and we only just managed, bagging one of the very last spaces! 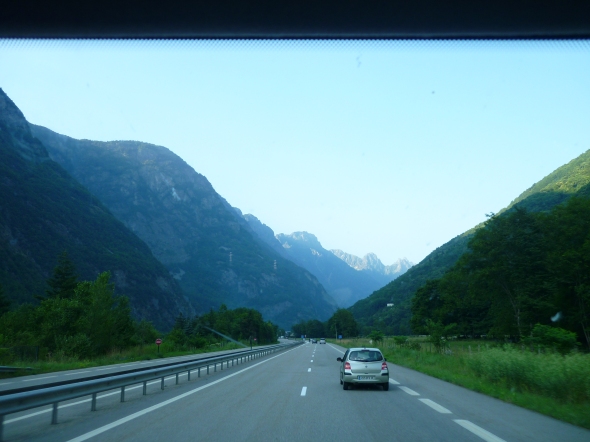 The drive to the mountains! 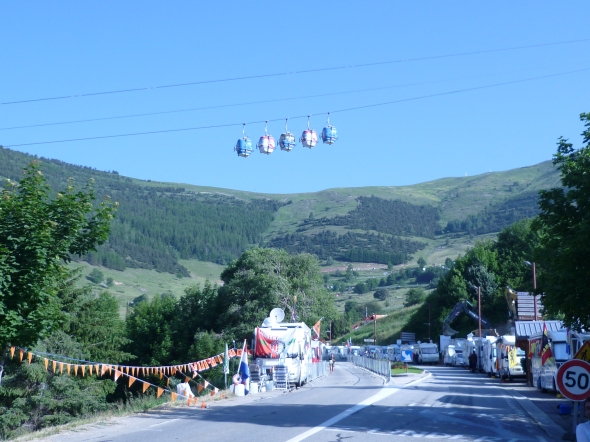 We were parked up between hairpin four and three (number one being nearest the top), around 4km from the summit. Each morning, before it got too hot, we would walk up to the top, to the little town. Here we were greeted with ever increasing spectacular views as well as some tasty patisserie and espresso for our efforts. 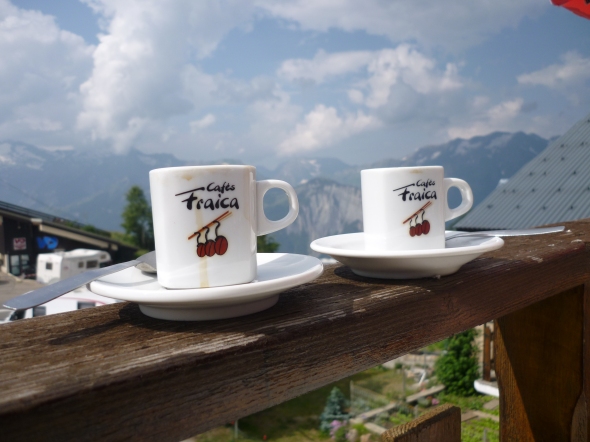 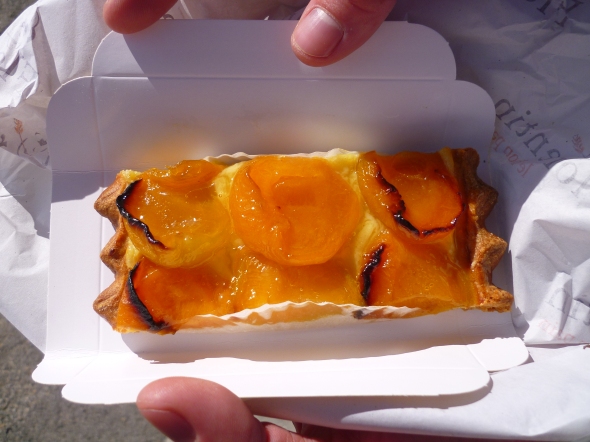 On the morning of the actual stage, the owner of said boulangerie loaded up the boot of her car and drove slowly down the mountain selling freshly baked – still warm – pain and croissants to the (rather damp – the day started off rather wet!) campers. For next to nothing. At home here in the UK, vendors would take advantage of that situation no end and hike prices sky high. Another reason to love France. Freshly baked warm bread in the morning is a basic need not to be messed with! 🙂

After our morning walk in the days leading up to the stage, we would spend most of the rest of the day sitting outside our campervan watching the world go by. And there was so much to see! As well as the hordes of serious lycra-clad cyclists taking their own go at the legendary ascent, there were plenty of novelty acts to watch pass by, not to mention the increasing numbers of team cars and busses in the day before the stage – very exciting! 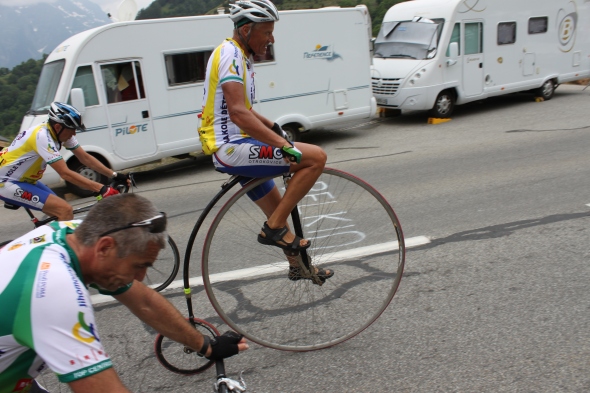 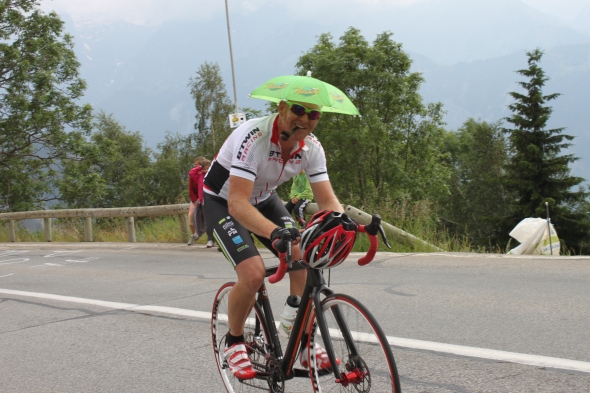 The atmosphere was brilliant and incredibly international, it was like being at one giant party all week. I even grew to embrace the Europop being blasted out of neighbouring campervans. It was great to see people from all over the world united by their love for cycling. On the day of the stage itself, everyone cheered on every single person that cycled past them, regardless of nationality or team. These guys are all heroes and it felt like an honour to watch them pass so close by! 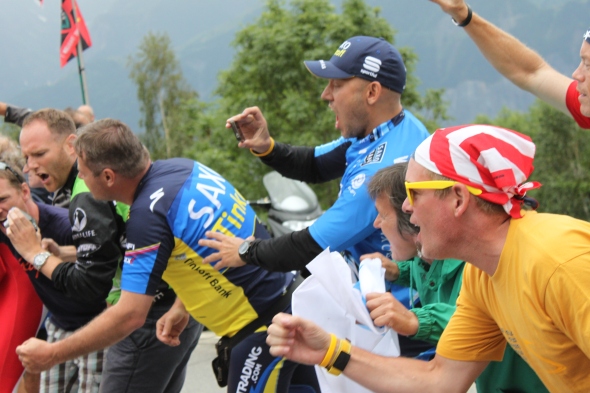 One of my favourite moments was when the little girl who had been camped opposite us with her grandparents went running inside to grab her dolly so that she could watch it too! 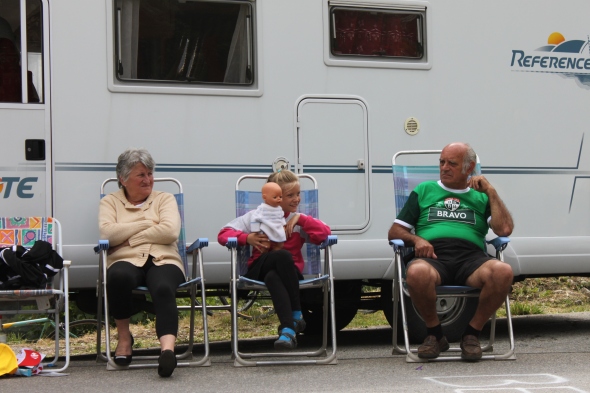 I will refrain from posting too many cycling photos, but here’s just a handful! 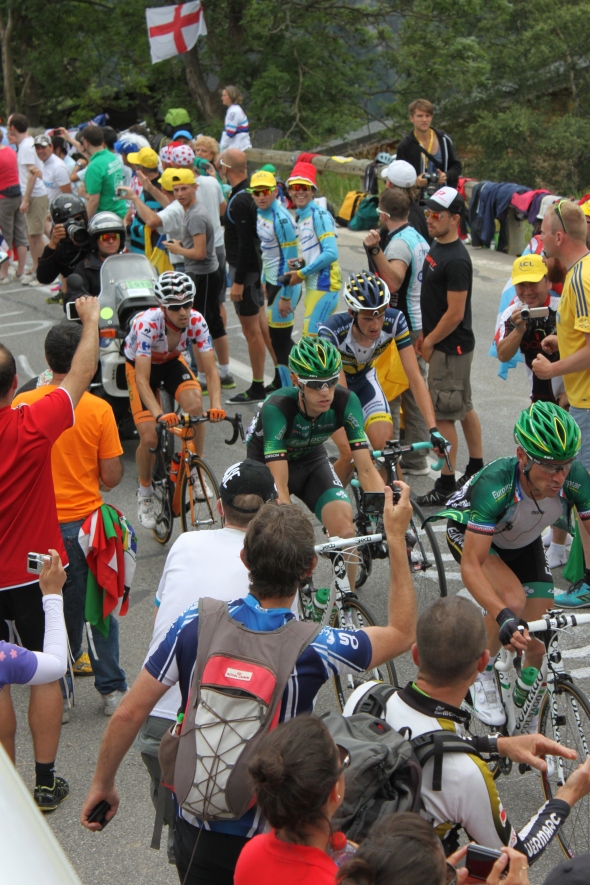 Thomas Voeckler (one of my all-times faves!) and Pierre Rolland 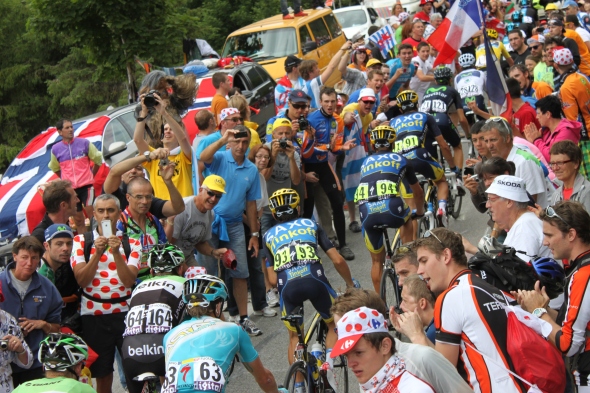 Peter Kennaugh giving a Manx flag the thumbs up!

All in all, it was a spectacular and incredibly memorable experience – I really hope we can do it again!

On arriving home from work this evening, we decided to make the most of what was suddenly turning into a rather beautiful evening and head out for a bike ride. Cycling along with the dappled evening sunshine coming through the trees, warming my skin and raising my spirits, was bliss after a hectic yet dreary day in the office. Particularly as I had started the day shivering into my jacket standing on a tram platform in the sort of incessant drizzly rain that completely soaks you through and saps your spirit in a way no other rain quite does. I think the key to this terrible summer is to really open your eyes and be ready to jump at every opportunity the weather brightens, the day’s are so crazily changeable at the moment that the most horrendous of days can quite suddenly turn into a lovely evening, and vice versa!

As we whizzed along I savoured the feel of the breeze in my hair and on my legs as the skirt of my dress swished around. We continued along our route for a while before passing by a woman with a discarded bicycle at her feet rummaging around in the bushes. We slowed down to stop and I realised there were clumps of brambles, juicy and ripe for the picking. I got quite excited! I adore brambles! Is there a better ingredient out there for a crumble?! They’re also great in cocktails! 😉 However, we had nothing, absolutely no receptacle what-so-ever, in which to take home our forages. I shall have to return, and be more prepared in future! 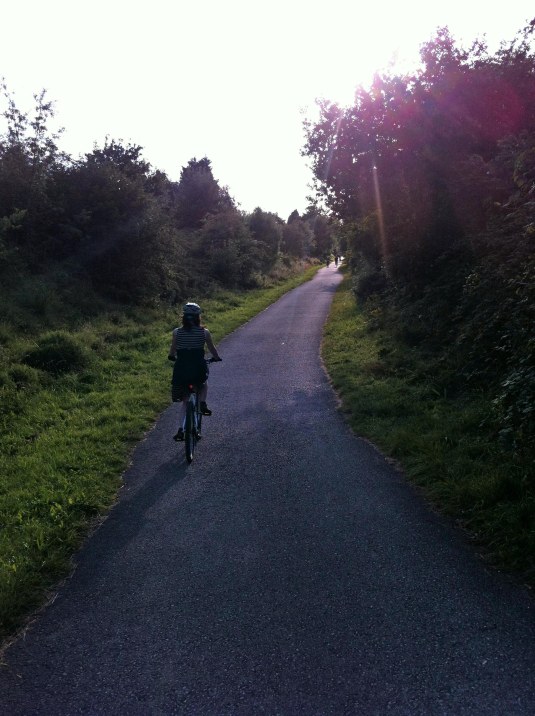 The picture’s not great as it was taken on a phone, the sky was actually a lovely pale blue with wisps of fluffy clouds, but unfortunately this got rather over exposed!